The Group 91 did not hesitate to take the bat and ball . The Group 91 played a team at the Six a Side Softball Cricket tournament organized by the Dharmaraja College Cricket Foundation.

The event was open for all Dharmaraja College Old Boy Groups & Associations. The event which was organised for the second consecutive year by the Dharmaraja Cricket Foundation, with the objective to build up relationships among all Groups and Associations of the Dharmaraja Old Boys. It was held at the Open Prison Grounds at Pallekelle, Kandy all day on 7th August 2005. 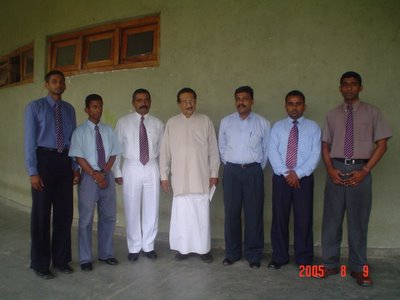 A talk to commearate the Dharmaraja founders day by Mr J R P Suriyapperuma will be held on 9th August 2005 at the College Audiotorium.

All memebers of the 91group are welcome...